The existing Windsor Bridge in Sydney’s north-west was built in 1874 and is one of the oldest in Australia. Originally designed for horse-drawn vehicles, it is now used by more than 19,000 vehicles daily and has reached the end of its project life. RMS has significant concerns that in the event of a major flood, the bridge would fail, leaving the residents of Windsor without a safe crossing.

It is expected that more than 25,000 northbound vehicles will use the bridge each day by 2026, and the current structure would not be up to the task. Therefore, RMS has commissioned a replacement bridge featuring two lanes southbound and one northbound. The new structure will complement upgraded intersections on both sides of the Hawkesbury River and will be located 35 metres downstream of the existing Windsor Bridge.

The project includes the new 156-metre long bridge, approach roads, intersections and modifications to local access roads. A new two-lane roundabout will be constructed, plus removal and backfill of the existing bridge approach roads, and the old bridge itself.

GEOmasta supplied the contractor with geosynthetic clay liner (GCL) and a 2 part dispenser unit for use in the construction of a 600m2 Bio-Retention Basin. Ideal for lining and capping, it is being used here as a replacement for thick and unwieldy compacted clay lining.

Geosynthetic Clay Liner is a composite fabric made from engineered geotextile and bentonite clay, making it easy to lay out and install. It provides an effective alternative to traditional clay liners that can be difficult to handle. GCL is primarily installed in containment structures, providing an end result that is equivalent to layers of heavily compacted clay.

GCL is manufactured by sandwiching sodium bentonite powder between an upper and lower layer of geotextile. All layers are needle punched and then exposed to a heat treatment to thermally lock the fibres in place, giving high long term shear strength.

The project is due for completion in 2020. 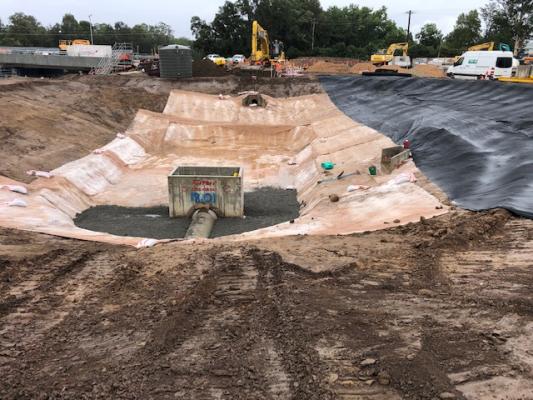